What Is An Impact-Resistant Shingle And Why Should I Have One On My Roof?

What Is An Impact Resistant Shingle?

Many shingle manufacturers produce an impact-resistant shingle product. These are rated as Class 1 – Class 4, depending on the size of impact it is designed to resist, with Class 4 being the greatest impact-resistant shingle. A Class 4 shingle is made to resist a 2” hail strike without breaking or cracking the shingle mat on the bottom of the shingle.

That's the important distinction – that the mat doesn't crack. It's not so much about whether or not the surface of the shingle gets bruised, but if the mat under the shingle surface gets damaged. To provide their shingles with this certification of Class 1 – Class 4 impact resistance, the manufacturers put extra material, or different material into the mat under the exposed part of the shingle. The primary way that manufacturers create impact resistance is by installing a woven fiber material into the mat area underneath the exposed part of a shingle. That woven fiber helps dissipate the impact of a hail stone so that it doesn't crack the mat. It's simply a way to reinforce the asphalt and make it stronger.

Other shingle products have been introduced over the last 20 years that use a different approach. It's called SBS-modified. SBS stands for styrene butadiene styrene and the asphalt in these shingles is modified in such a way that it forms its own polymer mesh network to basically “rubberize” it. An SBS shingle is much more impact resistant than a standard asphalt shingle with a reinforced mat because it actually helps prevent the surface damage that occurs during a hail storm. 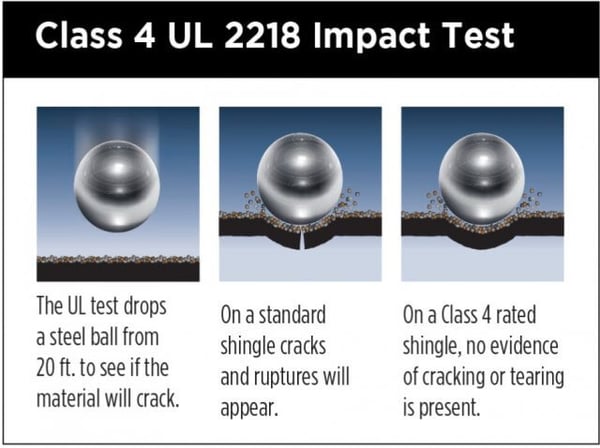 How Do They “Certify” Impact Resistance?

A Class 4 shingle is an upgraded product, so it costs more than the standard shingle you may put on your roof. If you're replacing your roof through an insurance claim, this upgrade cost would be in addition to your deductible payment that you would have to make.

So, why would you want to install a more expensive shingle? Because many insurance companies will give you a pretty hefty discount on your insurance rates for having this on your roof. Some companies give up to a 40% discount for having a Class 4 shingle, while an average discount is in the 24% - 28% range. The typical time to pay back your investment in a Class 4 roof is about 3 ½ to 5 years. Then your discount keeps paying after that! We've even seen some clients get such a huge discount on their Class 4 roof, that their pay-back time was as short as 2 years.

In addition to getting a nice discount on your insurance rates, you also should have fewer claims for hail damage, thereby saving you from submitting multiple claims and paying your deductible multiple times. The summer of 2018 was a great example of ROI (Return On Investment) for homeowners who bought impact resistant shingles. As a result of the June 13th storm in Fountain, we installed I.R. shingles on several homes. Then on July 30th, and August 6th, those homes were hit with 2 more massive hail storms. None of the roofs we had installed prior to the July and August storms had to be replaced again.

Remember that hail storms and hail stones are unique in that each one will have a different effect on a home. So the performance of your I.R. shingle may vary from these homes. However, you still can expect fewer claims for hail damage if you have an I.R. shingle on your house.