Someone Told Us We Saved Their Daughter's Life!

As part of almost every insurance roofing job we do, we end up replacing the rain cap on top of the furnace vent pipe. In most cases when hail has damaged the roof, it will also damage the cap on the furnace pipe. Most insurance companies will include this part in their claim to have it replaced. In some extreme cases, the cap is so badly damaged that the cap doesn't do it's job any more. Its job is to prevent water and incorrect air flow from getting into the pipe, but let dangerous gases, such as carbon monoxide, out. The photos to the right show a cap that was smashed by hail. Effectively, this cap was no longer doing its job and carbon monoxide was backing up into the house, unbeknownst to any of the residents. Unless a cap is inspected after a storm, a homeowner would have no way of knowing that there could be a problem.

After replacing the cap the resident told us that her daughter had been feeling dizzy and sick. We realized that this was due to the carbon monoxide. She was so happy to have found out what was causing her daughter's problem and even more happy that nothing serious happened. She told us that we saved her daughter's life! 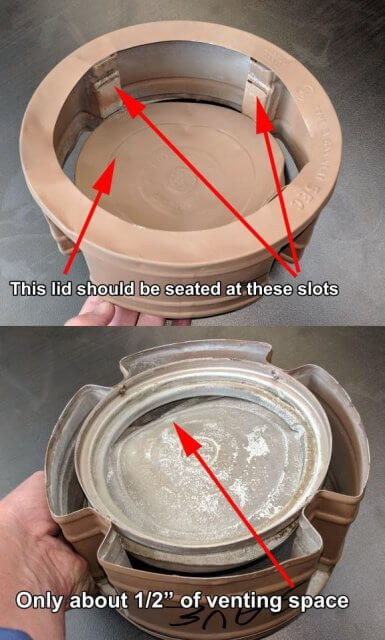 Here are two problems to be aware of and let others know about. One problem is roofers who don't replace the caps, or replace them incorrectly. Although it's easy enough to replace these, if it's done incorrectly, it can cause the same carbon monoxide back-up as a smashed cap. Many roofers will not replace them, but will still collect the money from the insurance claim for the replacement. Other roofers replace them with a cheap cap from Home Depot. These don't adequately prevent reverse air-flow, which can extinguish the pilot light, which then also causes CO to infiltrate

The other problem is insurance companies who don't include these in their hail claims. We recently had a job where the insurance company said they would not replace a pancaked vent cap because the damage was “cosmetic.” Make sure you know what kind of coverage you have with your insurance company!